From time to time, participants in the college’s study abroad to Nishinomiya, Japan, led by Tom Salsbury, will be giving updates on their experiences. This one was written by Dr. Salsbury and received no editing from the college.

Today was our second day at Imazu Junior High School 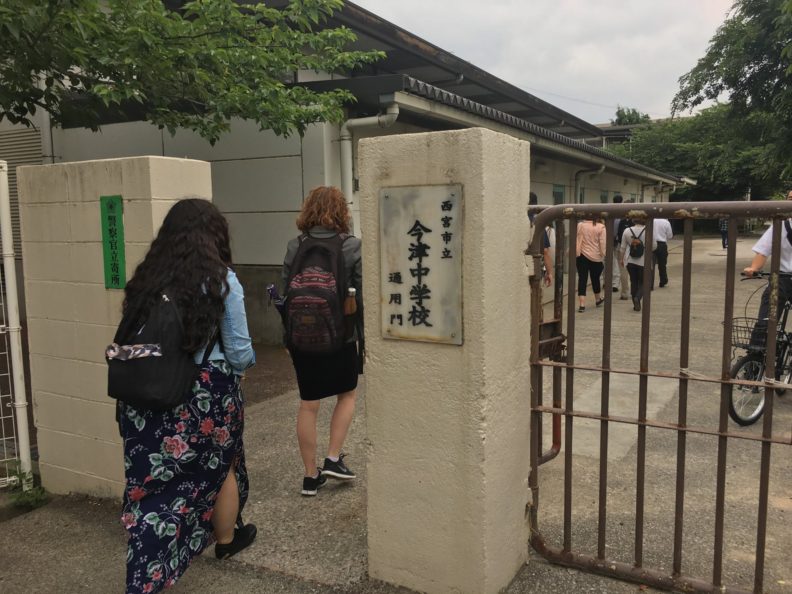 We started the day by observing the boys’ and girls’ PE classes. The girls played volleyball and invited some of us (those with proper gym shoes) to play along. Meanwhile, in another gym, the boys practiced the high jump. I was struck (a) by the lack of competition among the kids, and (b) by the organization of the groups. With just a single word or phrase from the teacher, the kids formed their groups, moved to their places, and participated in the activities. Everybody participated, and the happiness in the gymnasiums was palpable.

Next, we moved to a history class. We were greeted (in English) by the history teacher whose hook for the lesson on leadership was to show on the projector (in English) the question “Who is this?” He showed a picture of Donald Trump, Barack Obama, and Jimmy Carter, turning to us (standing in the back of the room) and asking politely if we could identify them. Next, he showed several funny pictures of the Japanese Prime Minister, Shinzo Abe (eating a donut, making a funny face, and smiling). The kids loved it! After this hook, he shifted register (and language) and began his lecture on 19th Century Japanese leaders.

The other classes we observed were Industrial Arts (a class on communications technology – from cups with strings to iPhones), biology (plant roots), and music (the kids practiced a choral piece). We took notes on classroom structure (activities, groupings and student/teacher roles). In our afternoon seminar, we heard presentations from classmates on (a) the changing roles of women in Japanese society and (b) the different levels of formality in Japanese. The discussions were rich, personal, and relevant to what we’re experiencing in our relatively short time here.

We finished the afternoon with class preparation for next week. The school lent us copies of their English course texts for the 1st, 2nd and 3rd year students. They’re hoping we can prepare 2-3 activities at each grade level to supplement the lessons in the texts. It’s great to be collaborating with each other and with the Nishinomiya teachers as we prepare these lessons.