WSU to manage all medical data for
World Triathlon and IRONMAN

Thanks to the first partnership of its kind with both World Triathlon and IRONMAN, a Washington State University faculty member and an orthopedic surgeon in Colfax, Wash. are now the official curators of all medical data from the two organizations.

Associate Professor of Kinesiology Christopher Connolly, and Dr. W. Douglas B. Hiller of Whitman Hospital and Medical Clinics have entered an official collaboration with the two groups, aiming to make the sport of triathlon safer than it’s ever been.

These two organizations, alongside USA Triathlon, are the major players globally in the triathlon sport.

In each triathlon that is administered under these organizations, on-site teams of doctors collect massive amounts of data about the athletes that participate, before, during, and after the races. The tandem will oversee curating and analyzing the data in meaningful ways, then presenting these to the organizations.

The data uses vary, but one example Connolly gave was publishing critical findings on ultra-endurance exercise in extreme heat conditions for World Triathlon’s Medical and Anti-doping Committee in order to create official recommendations for ultra-endurance training and competition.

“There really are a diversity of ways we can make this immensely valuable but the data will impact the sport as a whole and hopefully, the triathletes themselves,” Connolly said. “We’re hoping this will help elevate the body of quality research as it relates to triathlon safety and performance. “

Connolly said ultimately this will translate into race directors, medical teams, and athletes knowing the best practices and increase the actual safety of the athlete.

The IRONMAN World Championship has been held in Hawai’i each year since 1978. Hiller finished the event in 1982, 1983, and 1984, while at the same time doing orthopedic and exercise physiology research. While an inherent outcome of this type of competition includes some athletes pushing their bodies to, and past, healthy limits, Hiller said his eyes were opened.

“The medical tent at those races was a mind-blowing experience,” he said. “While most people quickly recover from their symptoms with rest, hydration, and nutrition, many require medical care on race day and after. How could co many incredibly fit people make themselves so incredibly miserable in so many different ways?”

Hiller said this misery seemed to be well distributed across gender, age, and fitness – but with little valid research on the ultra-endurance needs associated with the races at this distance.

It was that research that Hiller became interested in: something that could help make the sport safer, improve medical understanding and care at the races themselves, and disseminate more accurate information to the participating medical community and athletes.

Hiller said the initial findings were game-changing, including those dealing with hyponatremia, which happens when the blood’s sodium concentration is abnormally low. As an electrolyte, sodium can help regulate the amount of water that in the body’s cells. How that was affecting athletes in the early 1980s was something Hiller said was often misunderstood.

“At the time, ‘everybody knew’ that salt was ‘bad’ and was to be avoided, but thanks to our early research, and other studies, a change was made in medical tents around the world from a hypotonic intravenous electrolyte solution to a normal saline solution,” Hiller said. “This change almost certainly saved lives.”

Hiller also said that in those early days, there was a common misunderstanding that, in exercise, the heart would never fatigue before skeletal muscle.

It was that sense of discovery, and the positive outcomes from those, that kept Hiller going.

And, just like we know more now than we knew back then, Hiller said it’s important to continue learning from the data on up to about 60,000 athletes and make evidence-based recommendations for the following:

Strong past and current relationships

According to Connolly, the current partnerships are only possible because of Hiller, an orthopedic surgeon.

“Dr. Hiller has been in this triathlon world for 40-plus years and knows everyone,” he said. “He’s been chairman or president or director of nearly every medical committee at one time or other for IRONMAN and World Triathlon.”

Connolly doesn’t exaggerate. Hiller is in the World Triathlon Hall of Fame and has been medical delegate and chief physician to USA athletes going to the Olympics and Paralympics. He was most recently in Tokyo at the Paraolympics in the fall.

Aside from the longevity of Hiller’s involvement in the triathlon world, the latest agreement isn’t even the beginning for this group. For the past year, Connolly, Hiller and five medical students from the Elson S. Floyd College of Medicine, have been sifting through 30 years of IRONMAN data, accounting for some 15,000 elite athletes. Those data have been manually entered into a database. But with the newest agreement, not only will the current and future IRONMAN data be included, but also new World Triathlon data.

“World Triathlon opens up the doors to all other international organizations so it’s very meaningful,” he said.

World Triathlon is the governing organization that coordinates all 23 international triathlon organizations, including USA Triathlon. That includes being the triathlon arm of the International Olympic Committee, which Connolly said is especially significant.

Up to now, it’s data that is manually input by the team. But moving forward, the research team is working on a database that is expected to be used by each triathlon race’s medical director. Connolly said the change will drastically help.

“This will give us way more data than we’ve had for triathlons in a much quicker process,” Connolly said. “If each medical director inputs that data, it could give us the data of up to a million athletes within a year’s time.”

The doctors officially own the data, with WSU simply managing it. Connolly admits that initially, compliance could be a struggle. “This could be either because of data entry issues, or medical directors who aren’t on board with an added component of the process.”

But within a few years, Connolly anticipates full compliance.

The agreement between Connolly, Hiller, and the two triathlon organizations is only the tip of the iceberg.

Because the coalition is in its infancy, Connolly didn’t name all participants but said “The people who we’re inviting to be part of this are the who’s who of triathlon” and said all major triathlon organizations will be represented within this coalition, including medical directors and cardiovascular physicians working in sport performance.

The TRC will help organize and raise funds, including from triathlon organizations and sponsorships from performance-based businesses. 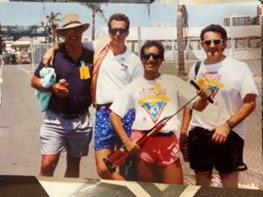