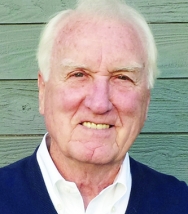 Lloyd’s personal and professional achievements, and his distinguished contributions to the field of education, have brought distinction to Washington State University and the College of Education.

Lloyd personified what it meant to be a proud alumnus of both WSU and the college. His loyalty to both was demonstrated by his 60-year career in the state’s public education system.

Following his honorable discharge from the Navy, Lloyd received his bachelor’s and master’s Degrees in education. He taught for two years at Franklin Elementary School in Pullman before moving to the role of principal in his third and fourth year. Following this, he worked for four years at WSU’s Career and Counseling Center in Education, while earning his superintendent credentials. While there, Lloyd developed enduring friendships with many of WSU’s educational leaders. He served under the well-respected Dr. George Brain, and attributed much of his success to having an excellent mentor.

Lloyd worked as a superintendent in the Prescott, Chimacum, and Nespelem School Districts, retiring at 55 to continue working in education as a superintendent search consultant for Northwest Leadership Associates. He also started the Cle Elum-Roslyn Alternative school, securing the building and running the school for the startup year.

Some examples of Lloyd’s service to WSU include:

Lloyd was an ardent supporter of the College of Education, giving freely of his time, support and resources, and was an active participant in the “Cougar Nation.” Lloyd brought distinction to the college through his life’s work and personal dedication.