The Best Five Years (you can bet on it)

We’re not sure what the exact odds would be on the accuracy of this statement, and obviously, we’re not trying to encourage gambling. But, hypothetically, if you were to say unequivocally that Noah Fitzgerald Thomas has had the coolest, most amazing college experience, you might actually be safe if you were to bet the farm on it.

I mean, we’re talking about the guy who was the intramural cornhole champion. No joke!

Noah is in year four of a five year Athletic Training program that includes both bachelor’s and master’s degree. Spring 2022 will mark the last semester of an unforgettable college career.

And it didn’t take long to start making memories.

All eyes on a new freshman

It’s not like there were a lack of fans screaming and making a ruckus. After all, this was Coug football and not during the Paul Wulff era. This was 2017; a bowl year following a bowl year. But something stood out about the the young freshman in Martin Stadium, hootin’ and hollerin’ with his dorm roommate who he said was his first college friend.

“So, I was just in the front row screaming my head off during the game, and this guy working for the marketing team comes up to me and asks if I want to play in the halftime game, which I, of course, said yes to,” Noah says.

For an athletic young man who knows how to throw a football, the contest was fairly easy: throw as many footballs as he could into the target from 10 yards out.

He won. He was asked to come back for the winner’s tournament on Dad’s Weekend.

He won that one, too.

“It was very easy in September. Harder in late November when I couldn’t feel my toes,” he jokes. “It was just a wild experience and the first time I had been on the field for a game.”

Another highlight was Noah’s role in the Chair Squad. Born out of a Sport Management class with some of Noah’s friends, including roommate and Sport Management student Will Millick, the group brought excitement to WSU baseball games before the season was ultimately canceled due to COVID.  They called themselves The Chair Squad. Whenever a Coug pitcher had two strikes on an opposing team’s batter, fans at Bailey-Brayton Field heard the unmistakable, squeaky, voice-cracking yell: “Give ‘em the chair!” Then, the chant: “Chair, chair, chair, chair, chair!”

Noah was more often than not the one with the squeaky voice.

It was so appreciated that first-year coach Brian Green even went into the stands to take a picture with the group.

Front-row season-ticket holder Brandon Chapman… yes, the author of this article… says this group added a level of excitement to Coug baseball games that had been absent for a number of years.

“I love the fact that this group showed it’s not necessary to wait for the athletic department to enhance fan experience,” Brandon says. “The fact that this was the brainchild of some sport management students makes it even better.”

Associate professor of sport marketing, Yong Chae Rhee, gave the group an A on the project.

Even though his college experience has included some iconic WSU moments, like the Boise State comeback in 2017, or College GameDay against Oregon in 2018, the opportunities provided him through the program can’t be rivaled.

Since that first time Noah stepped onto the Martin Stadium turf, he’s had many more times to do it through his program.

“I have had the opportunity to work five different WSU football games, which showed me how much I love being on the field more than in the stands,” he says. “Overall, there have been opportunities to work with every team on campus, as well as work at a few off-campus sites. These have shown me so many different sides to my profession and has really shown me where I would thrive in after I graduate.”

Noah says he chose his major because he wanted a career where he could continue his passion for sports and, at the same time, have a job where he could help people.

“I love being able to live out my dream in such a big setting,” says Noah, who is from small-town Centralia, the son of a Chris and Sarah (Fitzgerald) Thomas, his mother an alumna of the College of Education (CAS, ’92 teaching certificate). “Never did I think I would be working one-on-one with Pac-12 athletes and evaluating their injuries to get them back on the field as soon as we can.”

It’s that practical, real-world nature of what he is doing as a student that he says he’s been most impressed with, not just with Athletic Training, but all undergraduate programs, be it Kinesiology, Sport Management, or Teacher Education.

“Something great about the College of Education is how immersive it is,” he says. “I get to learn about certain rehabilitation strategies or evaluation techniques and then I get to see them first hand as I am learning them, which helps me remember them much more than just learning it in a classroom setting.”

Of course, any college that invests in hands-on opportunities has seen the challenges created by COVID-19. On-site internships and practicums were hit hard, especially with sports canceled.

“COVID has impacted me in that most of my opportunities this year have been shortened,” Noah says. “Normally, I would have rotations with Lewis-Clark State College in Lewiston (Idaho), a local high school, the University of Idaho, and a local physical therapy clinic. Now, our only open clinical site is LCSC, so we have been low on hours.”

Noah acknowledges that that’s tough. Sometimes self-doubt creeps in. But Noah says he’s tried to made up some of that lost time by helping with some on-campus activities, such as daily COVID testing. Also, because of the nature of the program, Athletic Training students still have the chance to have on-campus classes, which Noah says he appreciates.

“Being in-person has helped me learn so much better and has shown me that I’m definitely a hands-on person,” he says. “I have learned that I need to be more confident in myself. I know what I am doing, I know my stuff, I just need to go out there and prove to myself that I can do it. I’m learning resilience and I am thankful for it every day.”

Being able to help people is something Noah says he loves. Again, it’s one reason he chose Athletic Training. At the same time, he also recognizes those who have helped him so greatly.

“So many people have helped me on this journey,” Noah says. “They all have been so kind, generous, and willing to let me grow and I am so thankful for that.”

Noah is the recipient of the Viola F. Quinn Vincent scholarship. Viola was a Washington State College alumna (1929); her degree was in Physical Education. She never intended to teach. Instead, she wanted to be a physical therapist, but as there was no formal training in that field at the time (particularly for women), she had to learn on the job. She was a proud Coug who followed WSU sports closely and loved getting visits from faculty and students.

Noah says he is honored to carry on Viola’s legacy. And so thankful that he won’t have to worry about finances now or repaying loans later on.

“I’m forever in everyone’s debt for doing this because it will help me become the best Athletic Trainer I can be,” he says.

“I really feel like Athletic Training was made for me and I am made for it.”

In this video clip, Noah Fitzgerald Thomas says thank you for the scholarship that he won, and how it helps. Plus a little COVID safety message at the end. Total Run Time: 1:27. 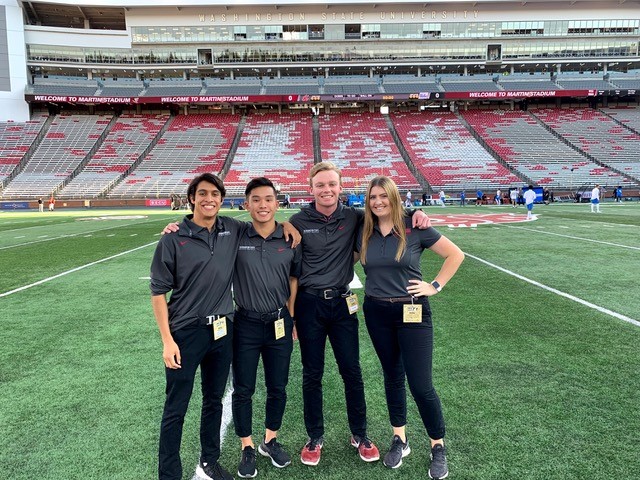 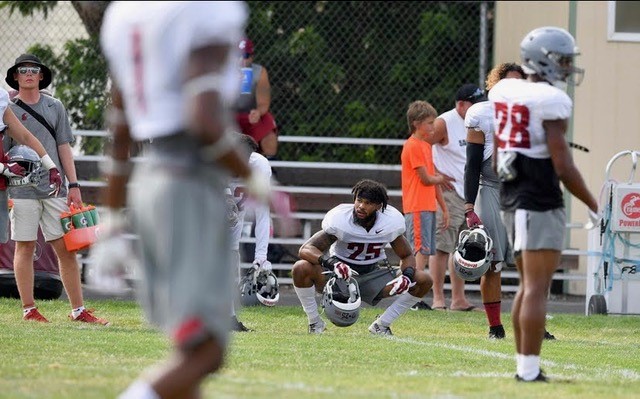 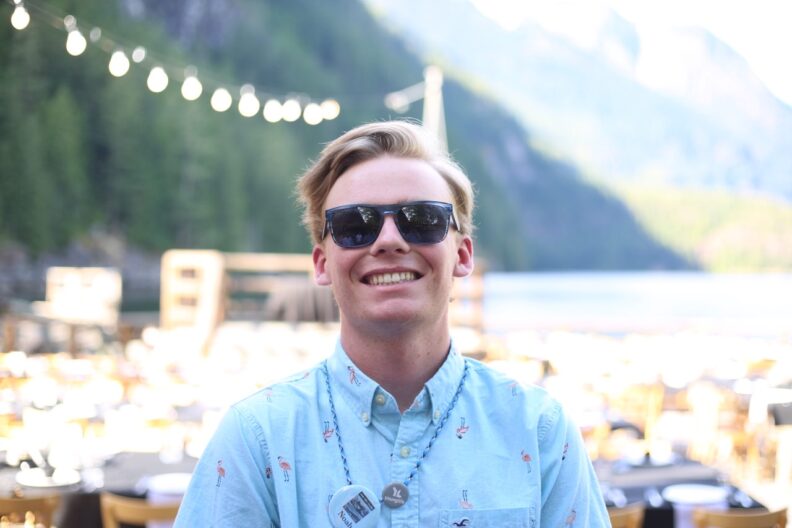 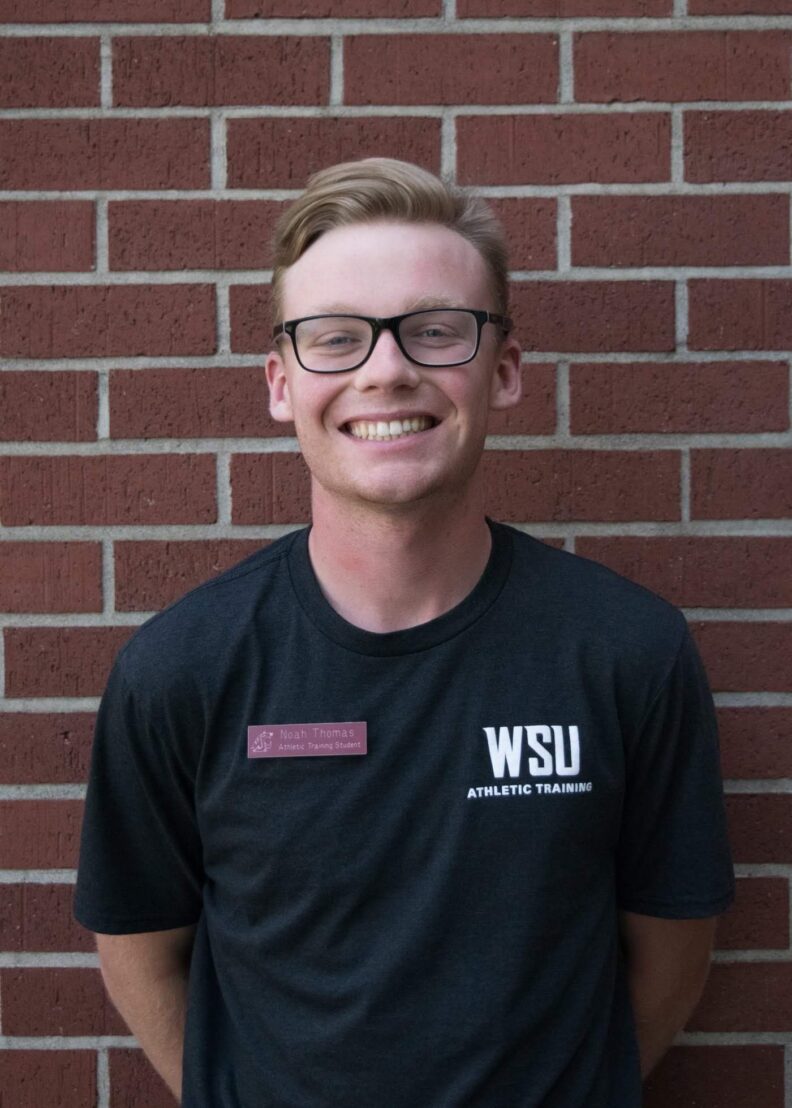 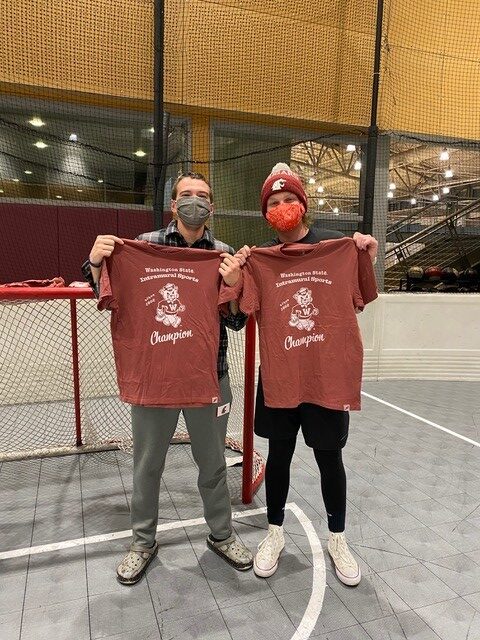