Micah’s Miles: One mile at a time

And he’s never even taken a step.

Micah was born to Jeff and Suzie Snell seven-and-a-half weeks prematurely on Dec. 1, 2009, with cerebral palsy. Though he is unable to walk or talk, his impact is being felt in a big way.

“Kids tend to stare at him, but people want to engage with him,” Jeff said. “That has put him in a position to affect change and allow people to better themselves.”

His dad has been running in marathons and takes Micah along for the ride in a stroller. Together, the father-son duo complete the marathons, raising money for various organizations with every mile.

“We love it. We started it about five years ago now,” Jeff said. “Our goal is just to surround our son with people who are focused on doing good in the world.”

Jeff earned his Bachelor of Science in mathematics education from Boston University, and then went on to complete both his Master of Arts in Educational Leadership, and Doctor of Education at Washington State University Vancouver. Today, he serves as the superintendent of the Camas School District, after previously working as the deputy superintendent from 2011-16.

Micah has been able to teach Jeff what other students and their families may be going through.

“Micah has made me such a better educator,” Jeff said. “He’s helped me understand more the struggle of supporting a child with special needs and understand their parents, their advocates, their peers.”

“Everything we do is about education. Micah’s no different than other kids,” Jeff said. “We try to create conditions for Micah to be able to learn and to make a positive impact.”

Micah’s impact on others

Through the 23 marathons he and his dad have completed together, more than $55,000 has been raised for various organizations.

Jeff and his wife Suzie started Micah’s Miles about five years ago and chose to partner with organizations that are directly related to Micah’s conditions. They strive to raise $1,000 for each marathon Jeff and Micah participate in. They have always met that goal.

“Our goal is to keep surrounding Micah with more and more people, and we’re just trying to find natural connections. We’ll target some groups that way,” Jeff said, noting their past partnerships with organizations such as the Make-A-Wish Foundation. “There’s always been a connection.”

The impact on Micah

Jeff said Micah enjoys being active and loves being involved with the marathons. He added that his son enjoys attention.

“We’ve noticed how much he enjoys being out there,” Jeff commented. “He likes the spotlight. He tends to turn it on for the cameras.”

Micah even gets excited the night before each marathon.

“He loves running. He loves being out there,” Jeff said. “He’ll even complain if we go too slow.”

Micah sits in his stroller, leading the way as his dad holds onto it and runs behind him. He is fed through a feeding tube, so come marathon time, his parents turn it to a slow drip so that he has a constant flow of food and nutrients while they are on the course. Sometimes, he takes a nap while his dad runs.

“He’ll be asleep sometimes for half an hour or so of the race,” Jeff said.

Not all marathons allow Jeff to run with Micah’s stroller, and though that can be upsetting at times, they decide to seek marathons that will allow Jeff and Micah both to enter the race.

The duo run in three or marathons each year. When Jeff initially began running with Micah, they completed marathons based on Micah’s age.

“When he was two we did our first one, and we did two that year. And we continued to do as many marathons as Micah was old,” Jeff said. “So when he was three, we did three. When he was four, we did four. When he was five, we did five. But that got to be unmanageable in terms of training and finding that many marathons, so we scaled that back to three or four per year now.”

Both Jeff’s and Micah’s names are on the entry form for each marathon. This sometimes means there’s a prize for Micah when they’ve crossed the finish line.

“Micah has been given trophies for winning his age group because there’s not a lot of other 8-year-olds who’ve ran marathons,” Jeff said.

As they continue mile-by-mile, Jeff hopes he and his family can continue to surround Micah with positive influences and allow him to make more positive connections.

“It’s been amazing to see the connections kids and others make with him,” Jeff said. “It’s heartwarming.”

To learn more about Micah and his journey, visit Micah’s Miles on Facebook or online at www.micahsmiles.org.

Food: He’s fed by a feeding tube — right now a concoction of every consumable bean imaginable

Sport: Marathoning, but he’s a big fan of the Seahawks

Animal: His running buddies, a stuffed money and stuffed tiger 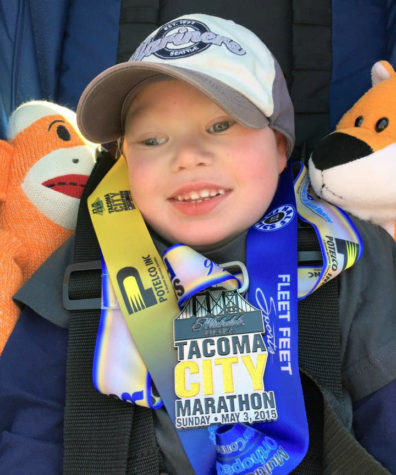 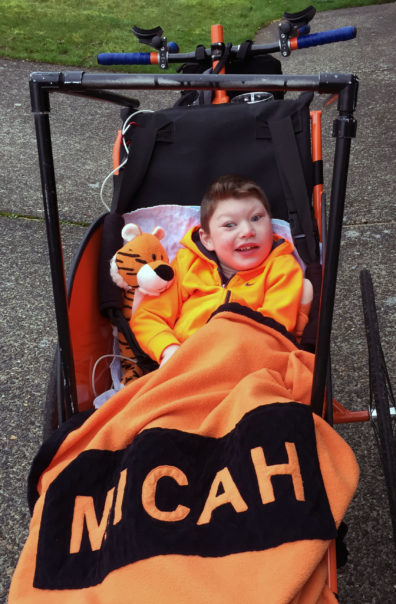 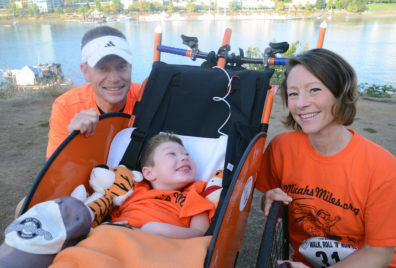 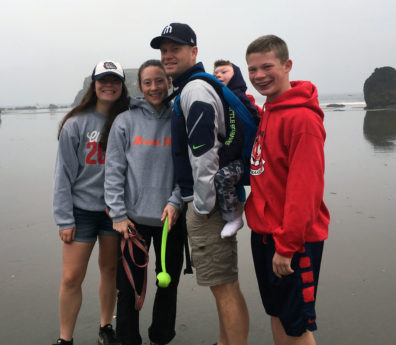