This spring, Washington State University had its first-ever team of students compete in the Diamond Dollars Case Competition at the Society for American Baseball Research Analytics Conference in Phoenix, Arizona. Undergraduate students Dante Ludlow, Matthew Cho, Alex Yano, and Reagan Stubb were tasked with developing a strategy for MLB teams to most effectively distribute innings within a pitching staff. The team will be presenting their findings and projected results for every MLB team, as well as discussing the experience of traveling to the conference, a trip that was partially funded by the Sport Management program.

Sport Management research meetings are organized by the Sport Management program at Washington State University. They occur monthly and feature faculty and student presentations of ongoing and completed research projects. Students and faculty from all programs are welcome to attend.

Those who miss the presentations but are interested in the topic can access the video archive of past presentations here: https://www.youtube.com/channel/UC0RdCHElWWJj0-X_x4EyAgA/videos. 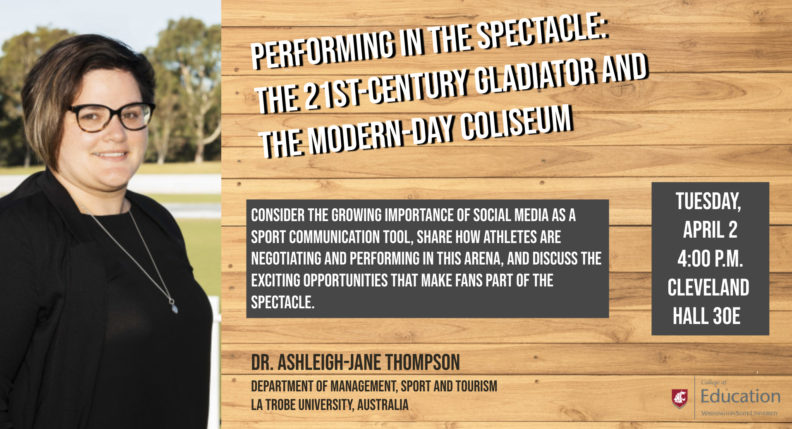 Jordan Hunter, a graduate assistant for competitive sports and special events at University Recreation and sport management student, will speak in the first Sport Management Research Meeting of the Fall 2018 semester. His presentation, “Trust the Process: Training Initiatives for Officials,” will occur 4-5 p.m. on Wednesday, September 26, in Cleveland Hall 255 in Pullman.

This presentation will examine how Washington State University Recreation adjusted its officials’ development techniques to better serve the students who need more attention while being trained as sports officials. The format of the clinics was changed to focus more on long-term officiating benefits and developing the whole official. University Recreation wants to put officials in a position where they feel empowered to do a good job while officiating and ultimately retain them as an official and allowing them to advance within its programs.

Sport Management Research Meetings are organized by the Sport Management program at Washington State University. They occur monthly and feature faculty and student presentations of ongoing and completed research projects. Students and faculty from all programs are welcome to attend.

The next research meetings this semester will occur on October 17 and November 7.

Those who miss the presentations but are interested in the topic can access the video archive of past presentations. 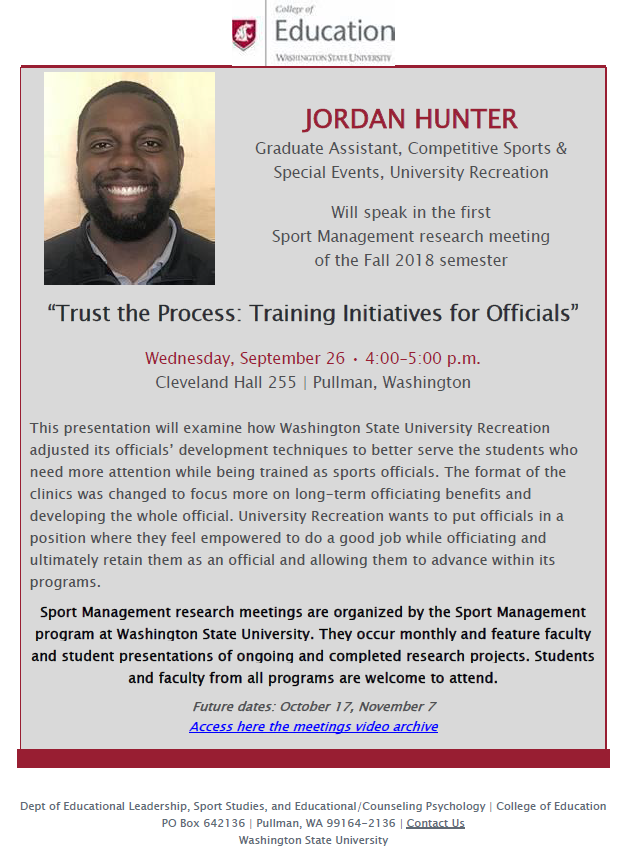 Dear friends,
The Mestizo Center is pleased to announce the last “Under the Skin” workshop Fall 2017. With the support of the Plateau Center for Research and Collaboration and Native American Programs and Native American Student Center we are honored to announce the visit of Black Feet Artist John Pepion  this Thursday November 30. Students, faculty, staff, and community members will have two spaces to listen to John’s story and co-create ledger art. People are invited to attend either or both 😃10-12 we will be in Cleveland 21A and 2-5pm Mestizo Center Cleveland Hall 121 (Beside the Math Lab). A couple of  links on John’s artistic are provided below. We hope you can join us in this semester’s last space of listening, dialogue, and creation. Our gratitude in advance for the support expressed to the Mestizo Center and “Under the Skin” series.

John Isaiah Pepion is an artist who hails from the Blackfeet Nation in northern Montana. The art journey has been ceremonial for John as his understanding of his past, family, and culture grows with his work. He descends from Mountain Chief, a Blackfeet leader who preserved history through numerous winter counts. Through art, John finds personal healing and cultural preservation. He speaks with troubled youth in public schools to promote the benefits of art as therapy. John holds formal degrees in Art Marketing and Museum Studies from United Tribes Technical College and the Institute of American Indian Arts, respectively. However, his education continues with every piece he creates and with every story he shares. John incorporates traditional design elements into colorful contemporary illustrations, leaving his work highly recognizable. Most importantly, John’s art deepens his connections to self and place, providing him with a sense of strength. 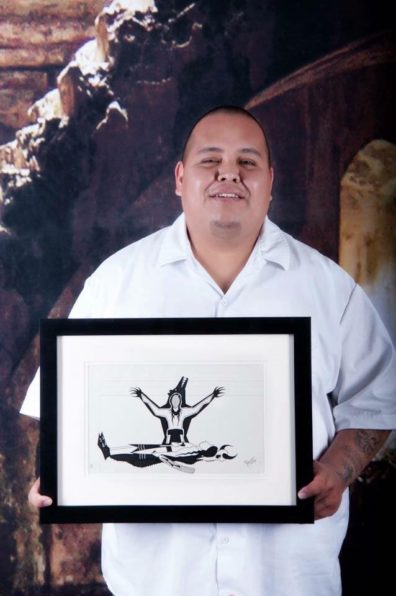 I start the workshop with an introduction of who I am and start talking about ledger art plus I show examples of my art. I explain the history of ledger art and where it’s at now. Then I share my work and tell my story. After that I hand out a few books on ledger art for youth and adults to view. Then I give the youth and adults actual antique ledger paper. I share how to draw my style of ledger horses or buffalo step by step 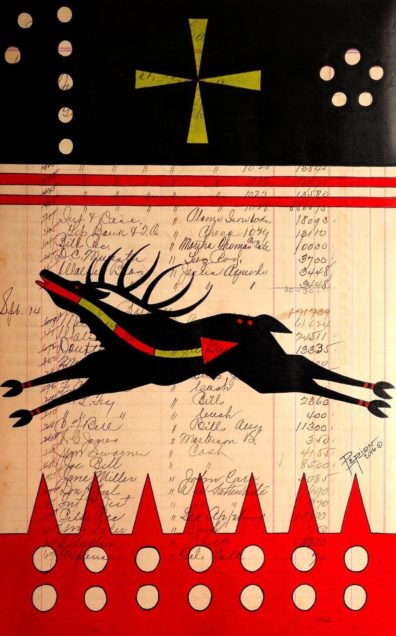 Dear followers of the Mestizo Center, we continue with our series of workshops this Fall 2017, exploring the complexities of identity formation. This Thursday, Faith Price, Assistant Director of the WSU’s Native American Programs, will share her experience as a mixed-race human being. In Faith’s words, in this workshop “we will explore the parts that make us whole, and the complexities of phenotype and racial identity”. This will also be a unique opportunity to learn from Faith’s skills to design and we will be co-creating with her a collective art piece. As usual, we will have wonderful food, conversations, and a great time.

Thank you for supporting #UnderTheSkin by spreading the word among your networks. Everybody is welcome. See you on Thursday, 2:00pm Cleveland Hall 121

Faith Price is the Assistant Director of WSU’s Native American Programs. She is of Wampanoag/African American/European descent. She grew up on the Flathead Indian Reservation in Montana, and graduated from the University of Montana.  She has one daughter who is even more mixed race than she is 🙂 In her free time, Faith loves to sew and has her own fashion line called Powwow Baby.

The Sport Management Club will have a meet and greet for all interested students.  It will be held Tuesday, August 29 starting at 6:16 p.m. in Cleveland 247.  There will be food, refreshment, and games.  Mark this in your calendar.  Come and have fun with fellow students who share your passion for Sport Management.

WSU Athletic Director Bill Moos will be speaking to the club members on Tuesday, February 21 in Cleveland 30W.  All members are encouraged to attend.  Non-members are also welcome.  This event is free for all members.  There will be a $5 fee for non-members.

The Sport Management Club will be going to Portland on Saturday, March 4.  The group will tour the Veterans Memorial Coliseum, followed by a Q&A session with the Portland Winterhawks front office staff including its general manager and head coach, Mr. Mike Johnston.  At 6 p.m., we will be taking in the Winterhawks’ home game against the Vancouver Giants.  The package for this trip is $59.50 which includes your ticket at the 100 level and a team hat, lodging, and gas money for carpooling.  It does not include tax on the hotel; so the final price is a bit over $60.00.  Lodging is based on 4 persons to a room.  Non club members are also welcome to join us for an additional $10.  Please contact any of the Club executives if you are interested in going.

Come and join us on Tuesday, January 24 at 6 p.m. in Cleveland 30W for pizza and beverages.  The executives will present the club’s spring semester activity line-up.  Both current members and non-members are welcome.

The Sport Management Club will have its last guest speaker for the semester on Wednesday, November 16 at 6 p.m. in Cleveland 311.  Our guest speaker will be Duncan Jensen, a proud graduate from our program, who is now working for the Phoenix Suns as an Account Executive in Membership Sales.  Come and find out about his journey from Pullman to Phoenix.